Morning mist advertises neighborhoods of webs I’d swear were not there yesterday. So wet and white, and so many: 23 just in the front strip of lawn between our porch and the driveway.

Look at the brushpile: 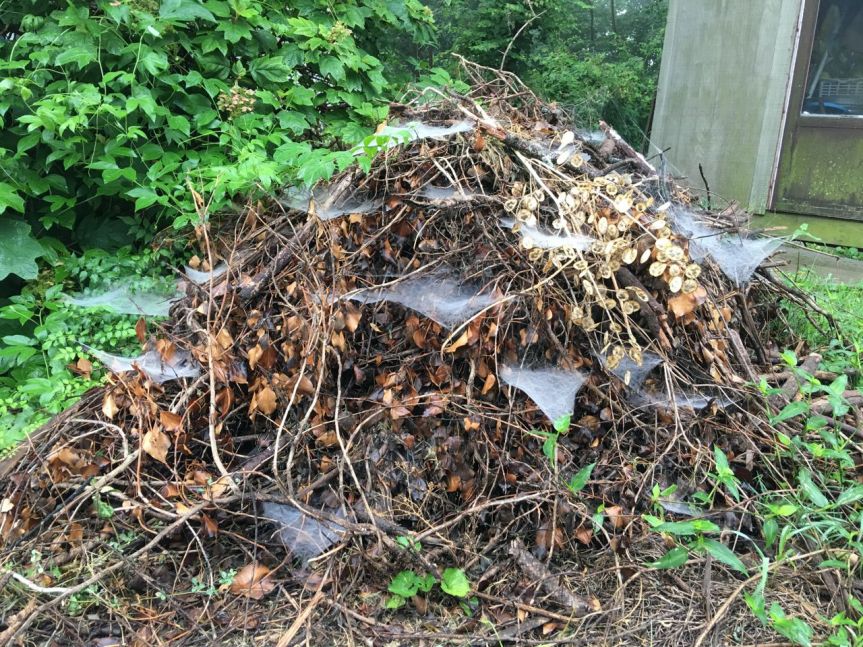 And look at the edge of my neighbor’s [exotic invasive] groundcover island: 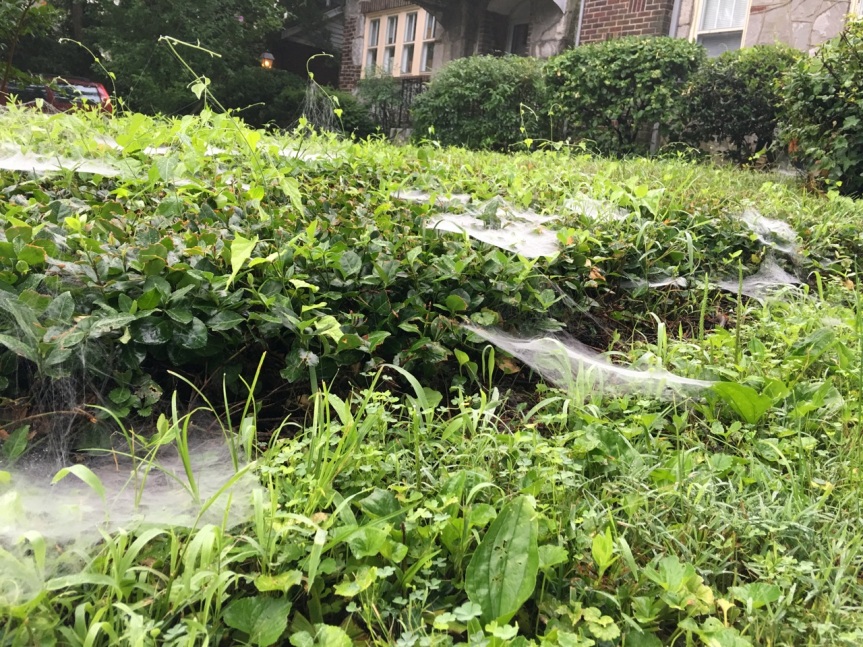 The webs are sheets with a hole. If you move slowly, you’ll see the funnel spider in the hole, waiting. They are good at waiting. They’ve got sitzfleisch: the ability to sit on one’s butt as long as it takes to get the job done. Such endurance behooves a dissertation-writer, a tax accountant, a funnel spider.
If you move quickly, the spider moves quicker and is gone.

If you hover close enough, you might see strands above the sheet meant to bump flying insects to the sheet. The sheets aren’t sticky, but they can ensnare, and they give the fantastically fast spider ample runway to dash out, inspect the prey and snag it.

My favorite place for funnel spiders is on the outside of our windows. They’ll eat whatever would come in, otherwise. Of course, the spiders come in, too. They build inside our HVAC return grates, and I let them stay. Our old house is full of uninvited creatures, and funnel spiders eat many of the smaller ones. I wish they could take care of the cockroaches and mice and cave crickets.

Do not google funnel spiders because the internet is full of terrifying tales of the type in Australia. Ours in Tennessee are in the Agelenopsis genus, also called grass spiders. There are too many species for me to figure out, so I’m sticking with funnel and grass, depending on where I see them.

I notice there is not a single funnel web near the bird feeders. How clever. Do the spiders know they would not be safe there? Or that the ground-feeding birds would have already eaten the insects?

I offer this post to show how pretty the webs, how interesting the construction, how useful the spiders. Last week, a facebook photo of a harmless jumping spider on a door screen prompted 84 comments, most of the omg-kill-it variety. I was bummed. Do all the commenters live in houses without spiders? Hard to imagine.

2 thoughts on “Funnel Webs in the Yard”