Walnut time is here again, and I’ve just realized I never posted my walnut work from a couple of years ago. I need to record what I’ve made so far, because 1) I’ll build on it next time, or 2) there will be no next time. I never know if an enthusiasm will catch fire or burn out. Either way, walnut work must be logged.

At our school, one corner of the parking lot is anchored by a big, native black walnut. This is not the species that gives us English walnuts (which are actually Persian walnuts): Juglans regia. English walnuts are sissy. Even I can crack two in one feeble hand. These are the walnuts at the grocery store—especially around Christmas-time—and are found heaped next to the pecans as plastic bags of wrinkly, beige brains. When cracked, English walnut nutmeat tumbles itself free, sometimes in perfect halves.

Our tree is the homegrown Juglans nigra: black walnut. A black walnut will dent your car, stain your fingernails, and clog the storm sewer. The husks are leathery green to brown to black (depending on age), and when fresh, smell wonderful. The inner shells are black, rough and thick. And to open the shells, you will need more than a toy soldier nutcracker. You will need to run over them with your car. Or squeeze them in a vise. Or whack them with a hammer against a board (with the shells wrapped in a towel you don’t mind ruining). And even then, even after all that work, most of the meat stays stuck in the crannies till jimmied with a pick.
Black walnuts are Slow Food. 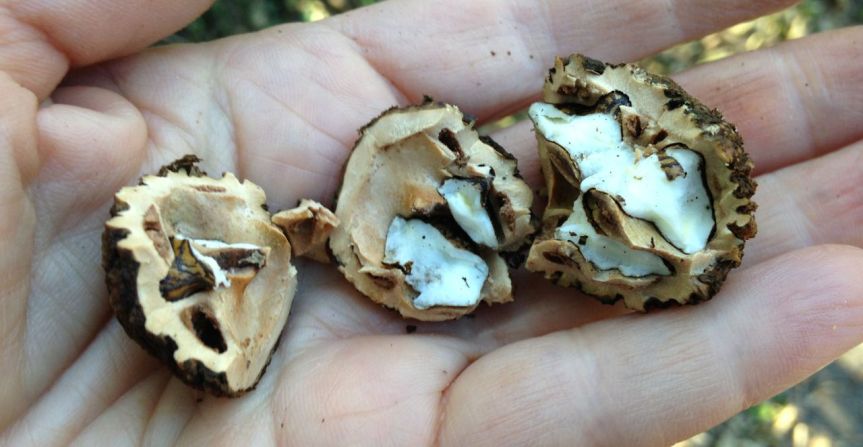 Two years ago, three of my classes went outside on various nature errands, and all three were completely distracted by the walnuts. Which meant walnuts became the new errand. The walnuts were still in the husk, so most were green tennis balls, but some were an aging brown, and some were smooshed, black and drippy. All were irresistible. Kids threw, kicked, rolled, and gathered walnuts. When I showed them how to stomp the husks off the inner shell, they stomped.
“My mom’s gonna kill me,” moaned a second grader, showing the bottom of his new shoes, now stained a forever golden brown.

HUSK vs SHELL
I need to be sure you know the difference between husk and shell. Forget the botany, because I always do. Walnuts aren’t even nuts at all, but drupes, or sometimes “drupaceous fruit” or worse, the unmemorable “tryma.” By husk I mean the thick outer cover you see hanging from the tree. It starts green, then it morphs to brown then black. Unlike the English/Persian husk, this one stays shut till you or a squirrel or your truck tire takes the trouble to remove it. Inside is the shell, and inside that is the nutmeat, or more accurately, the seed. The delicious seed.

I wanted my classes to see what grows around us, and to know what we could do with all those parts, and to use them responsibly.

“Coconuts!” is what a few students called the old, black shells in the grass from the year before.
But, after everyone hulled,
cracked,
nibbled
and made dye from their own walnuts, they knew better.
“Coconuts don’t grow in Nashville, but black walnuts do.”

DYE
Walnut dye is a substantive dye, meaning it doesn’t need a fixative (mordant) to stay. Anyone who has hulled a walnut barehanded knows this and will wear gloves next time.

FLY
I also learned about maggots. Most of the husks that had already begun to turn brown were occupied by the white larvae of the walnut husk fly. The adult female fly lays eggs in the husk; the eggs hatch in about five days; and the larvae eat their way through the spongy layer till ready to exit, drop and pupate underground. The larvae do not damage the nutmeat, but apparently, they do make husk removal even more difficult than it already is. They also gross-out the squeamish.

In class, I didn’t have time to do more than air the idea that there are insect species which depend on certain plants for their lifecycle. The fact may not be memorable, but the maggots will. As will, I hope, the fact that I did not squish or “throw away” the “bugs,” but walked them back outside under the walnut tree.

I’m glad we did walnut work at school when we did, because the next week, every single walnut had vanished. The weekly landscape crew had bagged them in plastic, along with every leaf for the dump. The parking lot was wiped clean. Too clean.

We’d gotten all we needed, but walnuts can feed wildlife all winter. (As can much of that leaf litter.)

Note:
This isn’t meant to be a comprehensive post about how to use walnut, or how wildlife uses walnut, or how one walnut in the backyard frog pond will kill all the frogs. There are plenty of sources for the first two subjects, and there is my friend Joanna’s whisky-barrel of dead tadpoles for the latter.